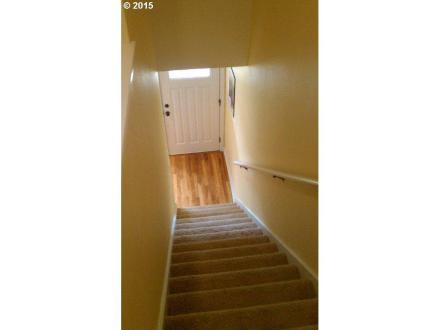 This recent picture of our apartment shows the steep staircase leading to the second floor from the first. Remember the bathroom was on the second floor and my child was two years old. Much to my friends’ amusement, I kept her potty chair in the downstairs closet. This greatly simplified my life so that I could cook dinner and not have to run upstairs with her. After a while, of course, she could navigate fine and the potty chair was retired.

We moved to a new neighborhood after a couple of years in this apartment. The neighborhood had gotten increasingly sketchy, and one day I found a homeless man asleep in the walkway behind our units. While Portland has an enormous problem with homeless people camping all over streets and sidewalks today. at the time it was a signal to move.

Amazingly, property values have soared in the intervening forty years for this apartment. At some point, it was converted to condominiums. The unit we had rented for $180 now rented for $2600 a month. Meanwhile, the units were for sale this year for over $400,000 a piece. Yes, they seem to have painted them, refinished the floor and crowded bigger appliances into the very tiny kitchen, but they haven’t made the unit any bigger. They have even now named the neighborhood “Nob Hill,” though I don’t remember any hill.