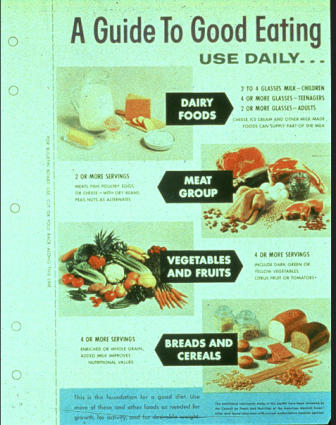 Nobody had commented about diet during my early years. I ate whatever was put in front of me without complaint. The idea that parents would plan their meals around children’s preferences had not taken hold in the 1950’s. So I was quite surprised in third grade to be presented with a version of the poster above produced in the U.S. in 1956 and distributed nationwide.

This plan prescribed “good eating,” and our third grade teacher used it to discuss a “good breakfast.” Up to this point in my life I had happily enjoyed a bowl of cold cereal with milk every morning. On special mornings it was Frosted Flakes, but generally it was Corn Flakes or Rice Krispies.  Our teacher went over the plan with us and then asked each one of us what we had eaten for breakfast that morning.

To my dismay, my classmates began describing hot breakfasts including eggs, bacon, orange juice or hot cereal, toast and orange juice. I quickly got the message and hastily invented the breakfast that I would report when it was my turn. So for that one day, I had two fried eggs, toast and bacon! It was the first time I felt shame about what I ate, but it would be far from the last time. Government edicts, women’s magazines and schools would be standing in line from then on to tell me what I ought to be eating.