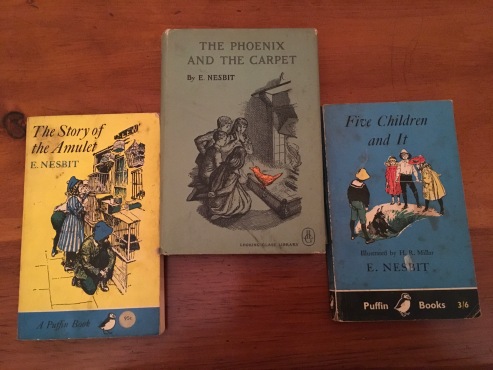 I spent the summer of 1958 on the East Coast, mainly with my grandparents in Western New York. My grandmother’s mother was from England and though my grandmother grew up in Oak Park, Illinois, her literature tastes were British. She introduced me to the stories of E. Nesbit, well worn copies of three of her books are pictured above.

This began my love affair with another genre of fiction–stories of groups of siblings left on their own having grand adventures. It turns out that there was quite an audience for those books and I found many such examples. Orphans, such as A Little Princess or A Secret Garden, were intriguing, but I really craved stories of four children, a mirror of the four in my family.

Later C.S. Lewis wrote his Narnia series, and my grandfather sent them all our way. Here another four children left at their great-uncle’s house(where ever are the parents in all those books I loved?) walk through a wardrobe into another dimension.  That idea of another world close by also appeared in my much loved Borrowers books, featuring a family living under the floor.

As you can tell, my middle school years were ones of reading book after book. There was no television at my grandparents. Even when I finally had a television at home, there was very little of interest to me. My passion remained, as it does today, in pages.