At some point, I began to be ashamed to have my photo taken. And ashamed of the pictures of me.  I was pondering this reaction while looking at a photo shoot a wonderful photographer just took of my family.

I suspect it is tied into the time I began to live in my head away from my body. That separation lasted many years, but it began around fourth grade. Before that I look confident and self-assured in pictures. After that, not so much.

I wonder how often that happens for girls as they leave that easy childhood and approach adolescence. I also wonder if those selfies which have proliferated everywhere mask a struggle between how we actually look and how we think we ought to look. And how often do girls “pose” instead of moving naturally in their bodies as they did as younger children? Is a “pose” any more embodied than I was in those years?

It is comforting to be observing these two days in the Catholic Church. Growing up, this time of the year was replete with demons, witches, goblins and horror tales. For most of the American culture, the focus is still on Halloween, long divorced from any sense of the All Hallows’ Eve source.

Today we had a litany of the saints, as the cantor read out the name of each parishioner or family or friend of any parishioners who had died in the previous year, as we responded in song after every twenty names. It is a meditative opportunity to reflect on those many lives who have touched our own. Two names were especially poignant for me, Father Andrew of whom I have written, and Steve Starski. Steve died after a long bout with colon cancer, but not before he was able to be certain that each of his adult daughters knew, without a doubt, that he loved her.

Our world is full of people like Steve, working quietly(in his case for the phone company), staying faithful to his wife, and loving his children and grandchildren. These days allow us to give thanks for “ordinary” people quietly walking out the Gospel.

Well no, I didn’t really travel by horse and buggy, but we did hit the trail for a family vacation to Walt Disney World. I earned an “I Survived Disney World” badge, but I couldn’t find any for sale in the 456 stores that dot the place. We went for the kids, and one of them announced on the car ride home,”Actually, Disney World was awesome!” So it was a success.

I did follow the deep wisdom of my child who wouldn’t let me take the grandchildren to Disney as they emerged from the womb. In fact she insisted that I wait until no strollers were needed for the kids. I insisted we go before I needed a scooter for myself! We did see many screaming toddlers and many older people on scooters, so we chose wisely.

It will be nice to return to the rhythm of blogging and to catch up with those I follow. 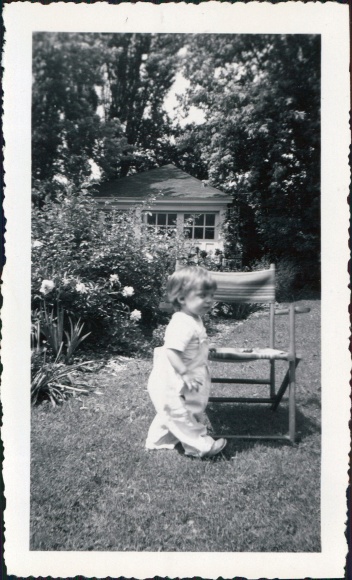 After my successful experiences in the gym, I realized I needed to add another activity to my routine to improve my balance and flexibility. I work with a trainer two days a week now, so I wanted something new and equally challenging. Enter Tai Chi at our local senior center.

In this photo I am holding onto a chair to support my first steps. In Tai Chi, I am holding onto a chair to try to begin to learn to balance on one foot! Well, technically resting one finger on the chair, but the chair is definitely helping. This is called a beginner class, but most of the people in the class have been doing it for a long time. I really needed an “absolutely really sincerely beginner class,” but no such luck. So  I am reminded that less than two years ago I had never even heard of proprioception, and I remember that mine is pretty tenuous. It would help if I had less than four limbs, each doing something different for the movements in Tai Chi. It looks effortless for those so-called beginners, but it’s going to take quite a while before I can move with grace.

Right now I am going to try balancing on one foot. For longer than 5 seconds!

Some people enjoy getting scared. The idea of “thrill rides” is, well, thrilling. The middle swing in this picture is of my husband and two grandchildren high in the air on a carnival ride. Needless to say, I am the one on the ground taking the picture. I was scared enough growing up to last me several lifetimes. Adrenaline and I are rarely friends.

The election is having a destabilizing effect on me, and I read this morning that it is having the same effect on many Americans. I am alternatively sucked into reading every word I can find about it and hiding from all information. The rhetoric is frightening, but it is not useful for me to be frightened by it. That only adds to the unsettling atmosphere around me.

I have been reading American history instead. It is comforting to see that we have come through equally difficult times. One Senator even repeatedly bashed another with a walking cane over the head on the Senate floor, rendering him incapable of serving for the next three years.

I have one vote, which I will cast on November 8. Until then, I will try to stay sane and not allow the ugly to live rent free in my brain.

I have only been blogging since mid summer, but I am starting to notice the temptation to look for “likes” on my posts. They seem to hit my 10 year old self who gets tickled that someone likes her. Of course, who doesn’t want to be liked? The problem arises when I start to get suggestions from people about how to increase my “likes.” I have the opportunity to reconsider why I am writing at all in the public sphere.

I find comments very helpful. They seem to connect with the adult who began this process to share my thoughts. I also enjoy “likes” from people I have heard from previously or with whom I have traded comments on their posts.  I especially enjoy the several writers I follow and interact with each week. The process reminds me of my childhood pen pals. Just yesterday I found a new writer I particularly enjoy writing about issues of social justice.

Wanting to expand my pool of like minded writers, I tried searching for genealogy blogs, but my first hit was a picture of a naked woman writing about “the genealogy of an O,” so I haven’t tried that again!

I am trusting that over time I will slowly meet writers I enjoy and that we can accompany each other on our journeys. That is the reason I began this, not to be liked.

I have been disheartened in a deeply personal way by the response of the candidate for President to the accusations of sexual abuse. Perhaps it is because I have heard the same kinds of statements throughout my life. “It never happened.” “Who would abuse her?” “Why is everyone blaming me?” “I would never ever have done such a thing.” “She must be crazy to be saying these things.”

Denial is a mystery to me. I think that in general it is just a way to try to divert the attention back to the victim. And denial has a chilling effect on the listener. Even the victim is vulnerable to questioning her own experience. The experience of trauma is real, but sometimes the details are remembered, sometimes not. Sometimes we remember the car was black when really it was blue. When someone puts the focus on the color of the car, we may back off from our very real experience of sexual assault in a car, no matter the color.

May we continue to, as the early women in the movement in the 60’s would say, “Listen each other into speech.” May we support each other, women and men both, in acknowledging the truth of sexual violence commonly perpetrated by men in power against women and men with less power. Let’s let truth, not denial, have the last word.

The news here has been teeming with discussions of sexual assault. For the many women my age, there is nothing unusual about the accounts of women’s experience. We were regularly taken as sex objects long before we knew that there was another way to be female. There is something terribly rewarding about the outrage that is widespread in the country about such “locker room talk” and behavior. It is as if finally someone is angry about how we were treated, even if it was many many years ago.

Still, the whole election climate has been upsetting, and I have needed to remember the true loveliness of the world. Here is one such image. May we all evict the abusers from our brains and fill our thoughts with the deep beauty available all around us.

We all recognize a genuine apology when we receive one. We can see the remorse in the offender, hear the grief in the voice, feel the wrong has been acknowledged and repented of. Apologies genuinely given can be genuinely received and the rift in the relationship can be mended.

It is hard to genuinely apologize to someone we have wronged. We first of all have to recognize that we have hurt someone else. Then we have to overcome the shame and the blame that comes with the realization that we have blown it. We can try to change the subject by reminding the other person that they, too, have hurt us in the past. Maybe that will take some of the heat off of us.

Or we can say a perfunctory sorry, the words coming off our lips but our body language revealing that we aren’t really apologizing. We see that in the forced speeches of prisoners of war who are told to apologize for being American. We can tell that they are merely repeating a text given to them by their captors.

Yesterday as one candidate went through his “apology” I wasn’t fooled. No woman my age could have been. We had seen that game before. And we weren’t falling for it again. 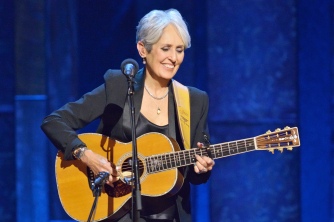 Last night I went to a concert of Joan Baez, now 75, performing a 90 minute concert with two musicians and one co-singer. Her son Gabriel, one of the musicians, played an astounding accompaniment on drums.

I first saw Baez in 1963(the photo on the left) in concert in Portland, Oregon with Bob Dylan. An electrical charge ran through us all, as it did between Dylan and Baez. Then her protest songs ran through my college years with her marriage to a draft objector, David Harris, highlighting my classmates resistance to the Viet Nam war. She had her son Gabriel about the same time I had my daughter, and her song “Honest Lullaby” encouraged me as a mother–“you got a mother who sings to you an honest lullaby.” Her cynical “Diamonds and Rust” with digs about Dylan resonated with my own attitude about romance at the time my marriage was dissolving.

In all, she has sung me through the majority of my life in a way that seemed quite personal. Last night, surrounded by a sea of fellow aging boomers, I realized that each of us, thinking we were alone with her voice, were actually part of an ocean of listeners. Our solitary experiences were united as we sang along, “Gracias a la Vida,” thankful for her life and our own.