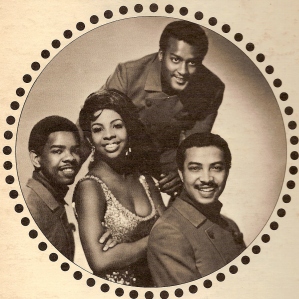 I went back to college in the fall of 1967 and started dating again. One of my first friends was a very white, prep school, jacket and tie man who took me to Boston ice hockey games. So imagine my surprise when he arrived at my house one afternoon telling me I had to hear something. Upstairs we went to my little stereo and after adding the 45 rpm adapter, he played “I Heard It Through the Grapevine” by Gladys Knight and the Pips.

One of the great ironies in my musical life is that with the advent of FM radio, local concerts and word of mouth recommendations about songs, my music had become re segregated. While AM radio had some “Negro” hits, they had disappeared from my listening world. They had disappeared from his also, hence his excitement about the song. I don’t know how he had stumbled upon it, but he not only played it for me, he taught me to dance to it.

The video I have linked is from the television show “Soul Train” which didn’t debut until the early 70’s. However, the dance steps they are doing are the ones he taught me. I never asked him how he knew the song or the steps. I suspect he had another life besides ice hockey! At any rate, we broke up in the spring, going our separate ways. No drama, just a college brief romance that was over. But I will always thank him for getting me “back in the groove.” I hadn’t danced that well since 7th grade.