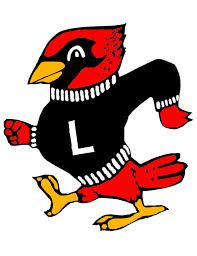 Before I move into the music of my more adult life after college, I am backtracking to include the songs I learned to sing at sporting events throughout school. The proof of how enduring these songs are is that when a dear friend of mine went into early labor, I drove her to the hospital regaling her with these tunes. They worked, by the way, and she held onto the baby until full term. She has never let me live it down, but that was the encouragement that came out of my deep brain at 2 in the morning.

Our high school’s mascot was the cardinal, particularly ironic since there are no cardinals in Oregon. Here the push was “We’re loyal to you Lincoln High, We’re red and we’re white Lincoln High.” (Colors play a big part in fight songs.) No wimping out here, “we expect a victory from you Lincoln High.”

Finally at Harvard I was treated to the loud, but incomprehensible,

Your guess is as good as mine. But it was fun to mumble along with everyone else!

Our junior English class was so enamored with the way Mr. Sanders taught that we petitioned the principal  (“remember the principal is your pal” spelling hint) if he could teach us Shakespeare as seniors. There had never been a Shakespeare class, and there was no text at the high school. Still, Mr. Schneider said, if we could fill a class, he would order texts and run the class for us. I remain thankful that he was flexible enough to help out a class of talented and eager students.

We read our way through almost of all his plays that year. Often Mr. Sanders would have us read dialogue aloud, taking turns with various characters. It became clear, early on, that only one student–Marc–was really born to the task. He would read with enthusiasm and gusto, waving his arms around and convincing us of each character he chose. The rest of us were either in awe or convulsed with laughter over his renditions of such characters as Falstaff. A lot of Shakespeare’s comedy is bawdy, but allowable since it was classical literature. Our other classes’ coursework would have pleased Queen Victoria, but here we could enjoy “dirty” jokes.

To no one surprise, Marc Singer went on to a very successful life as an actor. We had never seen him shirtless in high school, of course. But I was constantly treated to such images as the one above from Beastmaster in the years that followed. When ever I saw a picture or reference to him throughout the years, I smiled, remembering his “auditions” in front of a group of admiring high school seniors.

On a subliminal level, I must have tucked away this image as an inspiration for my own. Take another look at the image on my “about” page!