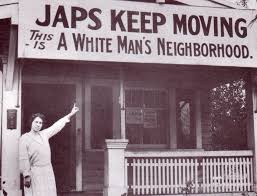 In 1942, President Roosevelt signed an order allowing the rounding up and imprisoning American citizens of Japanese ancestry. I grew up in Oregon, and went to high school with students whose parents and relatives had been rounded up and shipped to places like Idaho for the duration of World War II. I was astonished to think that “ordinary” Oregonians hadn’t protested the removal of their fellow citizens. Although Germany was also an enemy of the United States, there was no roundup of American citizens of German ancestry.

At that I reassured myself, falsely it seems to me now, that we could distinguish between American citizens and enemy soldiers. After all, many Oregonians of Japanese ancestry were third generation Americans. In fact, some of these Oregonians were fighting in our military forces.

As current events unfold, I say what I was not alive to say then. American citizens are American citizens. No one has the right to question their religion, their race, their political views or their clothing. Terrorists are terrorists, but they come in all religions, all races, all political views and wear all sorts of clothing. Let’s not repeat the view that allowed Executive Order 9066 to be issued.