When I was five years old, I had a beloved baby sitter named Mrs. Dully, an Estonian refugee.(How ironic that Estonia is again feeling threatened by Russia.) She lived near by and usually came to our home to watch us. One afternoon, however, I was at her home and saw this magnificent large machine. I had been hearing a lot about television, but had never seen one and had no real idea of what they looked like. So I asked her,”Is that a television?” She laughed and laughed and told me it was just a very large, very fancy radio. 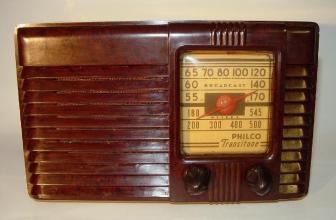 Our radio looked like the one pictured above. A simple squat brown box with a dial for the stations and a dial for the volume. No wonder I was in awe of her cabinet with its large speaker. It was the kind of radio families used to gather around to listen to shows together. We still listened to our record players and didn’t yet have a television. The radio was in my parents’ bedroom and was unimportant in my young life.

That would change soon. While I was outdoors playing, scientists were perfecting a miniature radio you could carry around with you. Unbelievable!