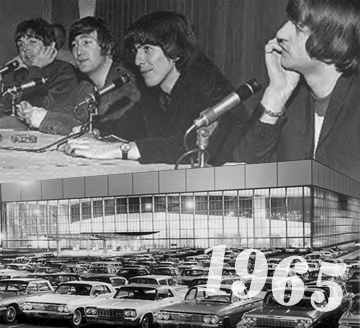 In August of 1965, a couple of weeks before I left on the train for college in the East, the Beatles landed in Portland and played two concerts in the then new Memorial Coliseum. My mother had somehow bought tickets for all of us and we went to hear the phenomenon

At 18, with my 15, 12 and 10 year old siblings, I was mortified at the thought that they might stand up and start screaming. I knew my brother would contain himself, but my middle sister had a crush on Paul, and I didn’t trust her to contain herself. All the way there, I stressed the importance of them being collected when the Beatles appeared. I was about to be a college girl, after all, and I had a reputation to establish.

There must have been some warmup acts to get us all restless before the Fab Four came out on the stage. Finally, they emerged. I stood and screamed my head off. My siblings sat still, obeying my orders to behave themselves. I surprised myself because I really thought I had not been caught up in Beatlemania. But, it turned out, seeing John in person let loose some primal excitement that needed to be expressed.

They never let me live it down! “Remember when you screamed at the Beatles?” How could I forget?

16 thoughts on ““The British Invasion””