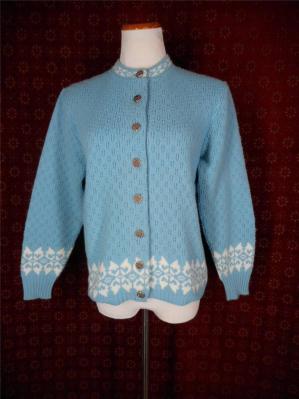 I had been buying my own clothes since the sixth grade and I was a late bloomer, so I still shopped in the girls’ department. Therefore, I went off to high school still dressed as a much younger girl. Fortunately, a new friend, Laurie, came to my rescue. She politely told me that I should not be dressing like a child now that I was in high school. Our high school was in downtown Portland, so after school she took me to THE store, Charles F. Berg and introduced me to the junior department.

I was overwhelmed by the choices confronting me in this new clothing arena. Plus, I had very limited resources. She said that I should just buy one item today and then, as I earned more money, I could add to my wardrobe. She had a sweater very similar to the one pictured above(now listed as “vintage” on Ebay) and I bought one nearly identical to hers.

I didn’t have any reliable adults in my high school years. I was no longer in Camp Fire Girls, and there were no new neighbors in my very isolated neighborhood. Laurie served as an advisor and confidante, even though she was my same age. At her encouragement, I went to football games and even to after game dances, though I never danced. Though she moved away after sophomore year, I depended on her to make the transition from kid to teenager. Thank goodness she did a clothing intervention, allowing me to look as if I belonged in high school. She saved me from being the “weird” girl, and I am very grateful.