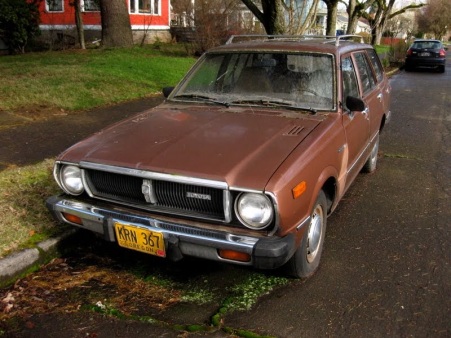 When I married Charlie, I gained another car with a whole new set of stories. I don’t think this is actually a picture of that car, but it could be. It does have an Oregon license plate. Anyway, it was so ugly that the kids wouldn’t let him drop them off at the door of their schools. They groaned whenever we suggested taking it, preferring to be crushed in the back seat of the Tercel.

The car was notorious in many ways. It was stolen twice. In Portland, car thefts were so common that they weren’t investigated. The police did suggest that probably kids at the near by high school had taken it so they wouldn’t have to walk in the rain. So we drove all around that school until we found it parked. It still had the wrappings from a fast food lunch and part of a gigantic candy bar in the front seat. We drove it home.

Once Charlie came out from playing tennis and saw a man unlocking the front door of our car. Apparently they were so easy to steal because they all used a similar key! He yelled and the man ran off.

But Dale came to the rescue one summer when we were on vacation(in the Tercel.) We drove up the street to find our wagon tied with a huge rope to a curbside tree. We thought Dale had outdone us in the practical joke battle. But, apparently the parking brake had failed and the car had rolled down the road. Dale had towed it back up and tied it to the tree so it wouldn’t run off again.

In the end, to everyone’s relief, we bought a new car.

5 thoughts on ““Dale and the Runaway Car””