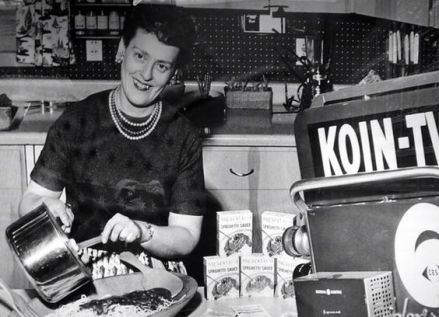 The summer after my first year of college, I returned to Portland for my summer job at a television station. This promised great excitement as I imagined learning all about the ins and out of television production. NOT!

I was assigned to the mail room replacing an employee who was away for some reason or another (probably terminal boredom!) Every morning I opened all the mail, sorted it, and delivered it to the appropriate department. I dreaded Mondays because there were two huge bags of mail, from both Saturday and Monday. However, one of the piles was for me, anything addressed to KOIN Kitchen. Yep, I was KOIN Kitchen’s mail recipient.

A viewer could request a copy of the day’s recipes featured on the show by sending in 10 cents with a self-addressed stamped envelope. I had to open this letter, insert the recipes into the return envelope and send them out in the mail. Easy-peasy, right? Apparently anyone sending money in the mail was paranoid about it being lost or stolen. So those poor dimes were glued, hidden in stapled packets, wrapped in aluminum foil, or scotch taped to an index card.

I had to remove the dimes, count them, and give them to the finance office. You got it. I spent most of that summer removing dimes from clever wrapping strategies. Television was certainly a thrilling employment opportunity!

5 thoughts on ““Lights, Cameras, No Action””