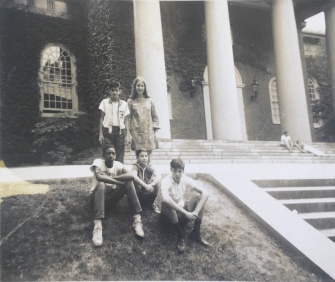 As in most places, there was a “town-gown” tension between Harvard and the surrounding city of Cambridge. To address that, many students volunteered through Phillips Brooks House, a center for community based projects run by students. I worked with “Challenge” an after school program for middle school Cambridge kids to supplement their math and science education.

For the first time, in the summer of 1968, we ran a program during the day using Harvard classrooms. I am pictured above with four of the boys I taught in a math class. Not only did the kids come to the campus for class, but we lived in apartments in their neighborhoods. In my case, I lived with a roommate in a second floor flat in East Cambridge, at that time a working class, mainly Italian neighborhood. Our apartment was next to a sausage factory.

I earned just enough money for food, the bus and the apartment. Even knowing I would need to work more during my senior year to make up the short fall, I took the opportunity. The kids were pretty easy going, considering they were doing “school” in the summer. But they gained some prestige from going to “Harvard” and we were able to share our talents with some underserved kids.

4 thoughts on ““A Real Challenge””