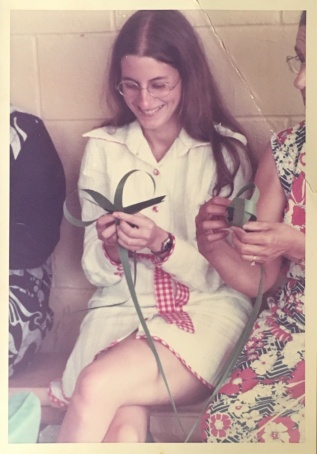 To rectify my total ignorance about Guam, I was sent there for a week to get to see the island, meet some people, and get a taste of island life(more on that tomorrow.) Two women from Guam had been hired by the Lab and were living in Portland for the year while we worked on the primers. Both were named Marie, a name as popular in Guam as Mary is popular in Connecticut. In the right hand picture above, one of the Marie’s is on the right trying(with no success I might add) to teach me how to weave the local leaves. On the left is a photo of a woman accurately weaving a basket with other common items shown on the screen behind her.

I learned that Guam is incredibly hot and humid, that the people are genuinely friendly, that the Air Force has a large base occupying the north end of the island, and that it was even more ridiculous that I was supposed to write a book for the kids. Any of the wonderful teachers I met during my visit would have been better equipped to write the books. Then the Lab could have simply provided technical assistance in getting them published. But I was not in charge, and I learned as much as I could for the job awaiting me back in Portland.