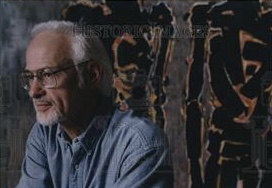 Harry Widman, a painter and an intellectual, taught at the college the entire time I worked there. He had come from the East after the War and was one of a group of artists who established an art community in Portland in the 1950’s. For some years, including the one when Mt. St. Helens erupted, he served as Dean, although he much preferred making art to administration.

Some colleagues are especially gracious to new faculty members. Such was Harry. Early on I needed my job and didn’t want to risk missing any days. But after I had appeared in divorce court, I was too shaken up to teach. Harry reassured me that it would be fine to go home for the rest of the day. Perhaps that sounds like a small gesture, but it meant everything to me that day. I understood that I had the support of a senior faculty member and that my job wasn’t constantly in jeopardy.

One of the most helpful things I learned from Harry was that it was not easy to spot which students would be most successful in art school from their admissions portfolios. He shared that some of the most promising looking students lacked discipline while some of the weaker ones stuck to it and succeeded. He stressed that work habits trump talent on a regular basis.

That’s a lesson that is applicable far outside of art!

4 thoughts on ““A True Gentleman””