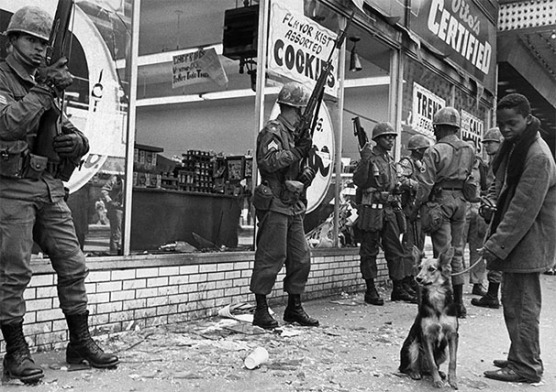 This was the scene by Sunday morning a few blocks from our apartment. The rest of the National Guard was camped in a nearby park, and we walked over to see the encampment. I have never forgotten the image of the soldiers camped out in a lovely Chicago park. That display of military force brought in against a civilian population–however much it might have been needed–chilled me. I did not feel reassured, but felt deeply uneasy.

I returned to college that Sunday afternoon and resumed my studies. We talked more about the Viet Nam War than about Dr. King, though he had also been vocally opposed to the War. On March 31 President Johnson had announced that he was not going to run for reelection, throwing the Democratic nominating process open. On my campus, students began to support Eugene McCarthy.

Little did I know that by August Chicago would once more be occupied by the National Guard as mayhem broke out at the Democratic National Convention. This time I stayed away!