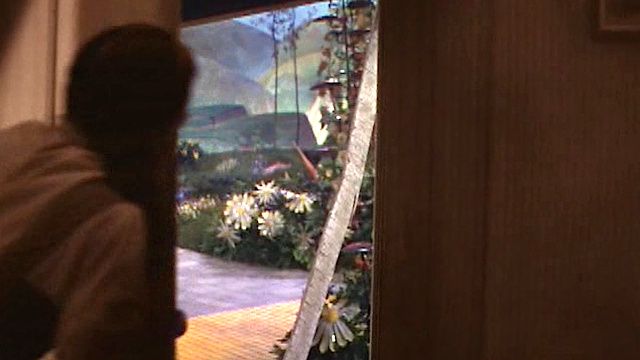 When I was a child, many movies were still in black and white, not to be cutting edge, but because that had been the only format available. I first saw “The Wizard of Oz” when I was seven years old. Of course I saw it in a movie theater because that was the only way I could ever see any movie. I was dumbstruck when the house landed in Oz and Dorothy stepped out into a world of color. The change still gets me every time no matter how often I can now watch the film at home on my little television screen.

My little brother was four and he ran screaming out of the theater followed by my mother when the flying monkeys rained out of the sky. My mother hadn’t seen the movie since it first came out, and I don’t think she remembered how scary those monkeys were. She had been seventeen and probably remembered it as a children’s movie. I was frightened to death by the witch riding by on her bicycle, and my grandchildren occasionally program my phone to play the haunting tune that plays in the background as the witch speeds by. They can’t believe that I was ever scared by the scene. However, they hadn’t seen it on a giant screen in the darkened theater.

I still crave seeing movies on the big screen. No matter how available movies now are at home, I fail to be immersed in the story as I always was in the movie theater. Some such dramatic moments stick with me still. On a date in Boston, we ended up in the front row to see the James Bond movie “Goldfinger.” I had never seen anything as startling as that opening image of a giant gold body. Violent movies certainly hit me harder. And monster movies, no matter how silly they look on television, genuinely terrified me and my friends well into high school. And lets not even think about love scenes, no matter how G rated they all were, filling a huge screen. There was no way Paul Newman had his eyes on anyone but me!