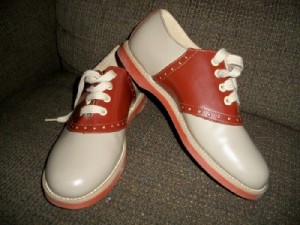 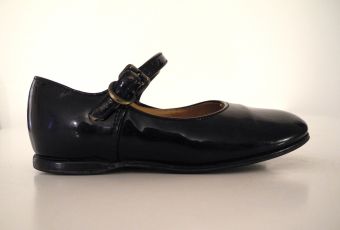 There was little doubt about what shoes I would wear throughout grade school. School shoes were brown and white saddle shoes. Party and holiday shoes were patent leather Mary Janes. I also kept a pair of sneakers at school for use in gym class where we dressed down to a blouse, shorts and sneakers. Shoes were handed down in my family, but since I was the oldest I had the benefit of new shoes.

Buying new shoes still seemed like an adventure, even if it was predetermined which shoes I would take home. The shoe store had an x-ray machine that looked to see how much growing room there was in the toe of the new shoe. Previously, the salesman would press down hard to see if there was room to grow. I imagine the x-ray machine was terribly dangerous rather than intriguing, but we didn’t know any better. We never bought shoes that fit at the time of purchase, only ones we could grow into. This meant that not only were the new shoes stiff, but they were also too big.

I kept my saddle shoes clean with saddle soap. I don’t know if it was really for saddles since it was sold in the shoe department. I enjoyed getting them clean enough now and then. I spent hours out of doors, so naturally they got scuffed and dirty. But those shoes were seemingly indestructible and they never wore out before I outgrew them. The shine on the Mary Janes was spiffed up with Vaseline.

Today children wear many different kinds of shoes and actually are often involved in picking them out. I was spared the choice, but fortunately I loved both of the ones chosen for me. I still stick to an Oxford for days and a low heel for special occasions. And they wear out, an experience I never had as a child.

11 thoughts on ““Shoes For Every Occasion””