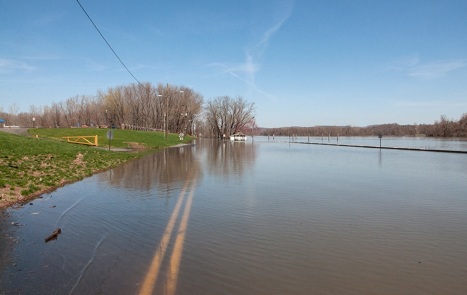 I grew up above Riverwood Road. When the Willamette River flooded, the newest houses built on the lowest part of the road flooded. Now we live near Porterbrook Road. When Porter Brook overflows, it covers Porterbrook Road. The picture above is of River Road in Connecticut during a flood of the Connecticut River. I in no way wish to minimize the suffering of people who are enduring floods, but I have been thinking about the wisdom in place names. As I listened to the reports from North Carolina, I heard of flooding on Water Avenue and Town Creek Road. Earlier this year there was major flooding in Marshfield, Massachusetts.

Years ago in the United States there was no flood insurance. Prudent people noticed where the water rose each year, including years of unusual rain and snow. They didn’t build houses there, though they often ran a road along the river. Naturally they named the road appropriately. Now we have people with no local knowledge living in homes along such streets. And those streets are flooding.

We lose much when we lose local knowledge about weather and its effects. My mother had a small beach cottage built in 1930 set way back from the Pacific Ocean. One house lay next door and then the ground was undeveloped for about a block toward the sea. One year someone bought that vacant property and built a house on it, obstructing their neighbors’ view while gaining it for themselves. Two years later a winter storm sent logs crashing through the plate glass “picture” window. There was a reason people had not built on that land.

May we accept the reality of climate change, whatever the reason for it. May we recognize that earlier generations had knowledge about where to build that we ignore at our peril.