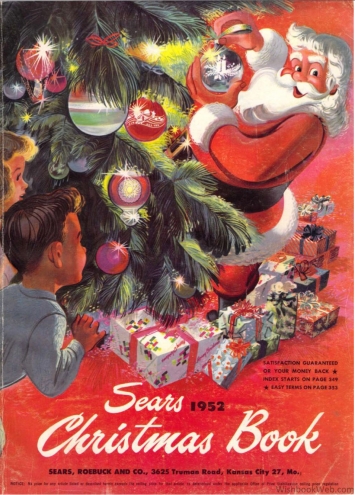 I actually had lost my two front teeth just before Christmas when I was six. This allowed me to happily sing the tune “all I want for Chrithmath is my two front teeth.” But other years the next best thing was the Sears Christmas catalog. It arrived in November and my brother and later my sister and I fought over getting to read it. It kept us endlessly entertained, though it had little effect on what we actually received for Christmas. In general we would get a couple of books, some new pajamas, some candy and a couple of toys. Certainly not as many as we had discovered we wanted from being exposed to the bounty of the Sears catalog.

The catalog was absolutely gender specific, with a section for girls and a section for boys. Sears made it abundantly clear that girls play with dolls, play house, draw and paint. Boys were to dress like cowboys, shoot guns and play outside. No discussion ensued about the distinctions. If you wonder about the vehement insistence when my boomer generation became parents on “gender neutral” toys, it began here. Every boy who wanted a doll and couldn’t have one and every girl who wanted a bb gun and was denied made a movement characterized by Marlo Thomas singing “free to be me.”  Among many children my daughter’s age, however, most kept happily going for the toys Sears had suggested for them when I was a kid,  with boys using sticks for guns and girls making dolls out of odds and ends. But at least we had told them they had a choice!