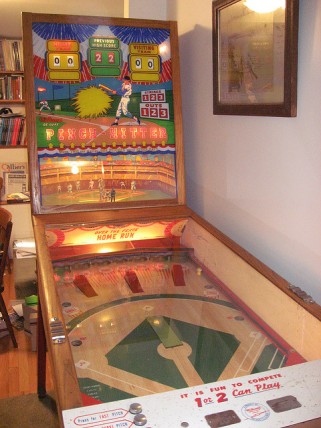 Before video games, I first played pinball machines. I especially enjoyed the one shown above which was in the Greyhound Bus station where I waited for my high school bus ride home. It was a very basic game with the ball coming out from the pitcher position on the board. The flippers were limited to two at the bottom of the game, allowing you to hit the pitched ball or rehit one which rolled back. Each time a ball landed in a base hole, a runner would advance on the screen.

Later I played pinball machines in my 20’s when I encountered them in taverns. I noticed that they were almost exclusively played by men who always achieved scores far above mine. For a long time I thought this was just due to the men having better eye-hand coordination than I did. But once I played against a boy friend of the time. I was astonished to watch him thrust his pelvis against the front of the machine to redirect the ball. I realized then that men were ideally suited for this kind of pinball action. The games were at their hip height and the action was natural.(Remember this is G-rated!) No wonder they got such high pinball scores. And only rarely did I watch any man get the Tilt warning which ended a game.

I continue to enjoy pinball machines whenever I find vintage ones in arcades. But I never again try to surpass the “highest score” shown on the screen.