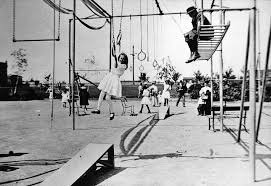 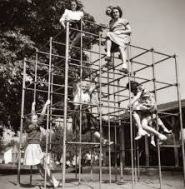 The best word in grade school was “recess.”  We had two of them every day, morning and afternoon. Rain or shine(and in Portland, Oregon it was often rain)we poured out of the classroom to play. We had most of the equipment pictured above, including the line of hanging rings, the jungle gym and the merry-go-round. I had to laugh when I was collecting these pictures off the internet since they were all found under the title “dangerous playgrounds.”

I suppose the playgrounds were dangerous compared to those of today. One could easily fall off the jungle gym, though I never knew anyone who did. We all seemed to pace ourselves according to how secure we felt climbing high. The rings were cushioned underneath with sawdust which helped when I inevitably fell before making it all the way across. The merry-go-round was probably the most potentially lethal since as it went faster and faster it could possibly fling you off. However the girls I knew who went flying off did it on purpose. The most damage I suffered was severe nausea from the spinning.

No teacher came outside during recess to supervise us as they do today. We were expected to work out all our squabbles over whose turn it was to use which equipment. I think the girls tended to use the equipment more than the boys. I remember the boys doing more general running and falling to the ground in mock battles on the grassy field.

I imagine that the boys in my school days would all be labeled ADHD today. They all fidgeted, spat paper wads, poked girls and ran amok outside. Fortunately we just thought that was what boys were like. Thank goodness they had not only two recesses each day but also daily gym class. Educators when I was a kid knew no child could go more than two hours without jumping or running. So they let us do both.