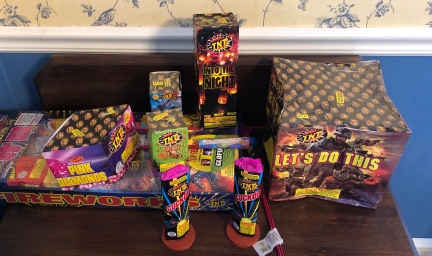 It’s the 4th of July here, the day we celebrate our Declaration of Independence from Great Britain in 1776. Of course a war ensued, and it wasn’t until 1783 that the last British troops left New York City. But the energy here is on the day we declared we would be our own nation.

People throughout the country celebrate by setting off backyard fireworks, and towns put on elaborate displays of sky explosions. Laws vary across the country about what fireworks are legal. As a child in Oregon I could only legally use sparklers, long metal sticks which, when lit, emitted sparks. Our neighboring state of Washington had much laxer laws, and there things such as bottle rockets were allowed. Best of all, on our drive back from New York when I was 11, we bought all sorts of contraband in Wyoming where everything was legal. I am amazed that my mother allowed us to drive home with the explosives safely under the back street.

In Connecticut our grandchildren bought the array of fireworks pictured above. They look much more dramatic than they are. Mostly they emit sparks for various lengths of time depending on how much each one cost. Some also make an ear piercing whistle while they smoke. Nothing explodes and nothing goes airborne.

I suppose the danger of these things makes them especially appealing to kids. Hence the state regulations on their sale. But in “Live Free or Die” New Hampshire, two states over, everything is legal. Large billboards on our highways encourage us to cross the state lines and buy from Phantom Fireworks. Despite pleas from the kids, we stick to our less flamboyant but safer stock.

May you have a great day whether you celebrate the 4th of July or not. And remember we didn’t declare our independence to end up substituting a banana republic for a monarchy, tanks rolling down our nation’s capital’s streets not withstanding.