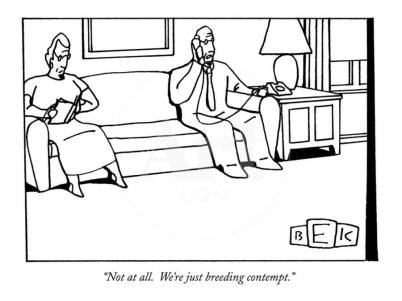 The above cartoon from The New Yorker illustrates an aspect of marriage that John and Julia Gottman, of a marriage institute in Seattle, say is the “single greatest predictor of divorce.” Contempt occurs between people and at the moment is widespread in the political arena. But what sets contempt apart from dislike or anger?

Contempt claims a moral superiority over another. Often it extends beyond a single target to a whole group of people. At the moment it seems that half of Americans are contemptuous of the other half. If the Gottman’s view of divorce applies to nations, we are approaching a civil war. What would it take to pull back from this toxic precipice, whether at home or in the public sphere?

We could start with the simple statement: “you may have a point.” Contempt is much easier. It provides television stations with viewers. You can choose your program to suit your own particular contempt targets. It can be amusing when we watch comedians skewer those we disagree with. It can stroke our egos when we look down on another part of town, another kind of dress, or other people’s habits. Contempt really tempts us because it gives us a chance to feel superior. And feeling superior can feel good.

Instead of saying “how could anyone believe anything that stupid?” (one of my standard expressions) I am going to try a new approach. Why does the person believe that? Is there any merit in their point of view? If there isn’t, can I share another view with the person? Not, clearly, if I go into any conversation with contempt at the ready!