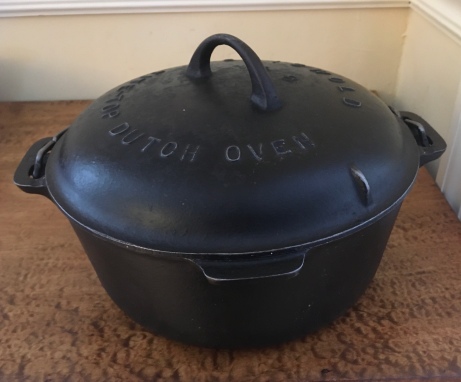 A couple of Thanksgivings ago I had cooked a Tofurkey in this pot for the vegetarians among us. (Yes. That is a real thing, despite the strange looks I get when trying to find one in the supermarket.) I found a relative studying the vessel and then cornering me to find out, not about the Tofurkey(he was deep fat frying a turkey at the time), but about the Dutch oven.

He had a restaurant and loved seeing old kitchen items, but he said he had never seen a Dutch oven like mine. It was another inherited piece from my grandmother and I used it all the time without thinking much about it. Manufactured by Griswold, this Erie, Pennsylvania cast iron pan turns out to be of monetary value in the world of cast iron collecting. (Who knew that there was even a world of cast iron collecting?) While I have no intention of selling mine since it is in constant use, I was intrigued that he was right to inquire about it.

The lid of the Dutch oven also fits on the cast iron skillet I wrote about a couple of days ago. This comes in handy when I want to braise some meat with less sauce than I might use in the Dutch oven. The larger pan holds chili, stew, soup and a variety of sauces. It was a slow cooker before someone decided to market an electric slow cooker. I do have to remove leftovers to store them, since tomato based food will take on an unpleasant(albeit healthy) metallic taste if left in too long.

As to why it is called Dutch. I have no idea.