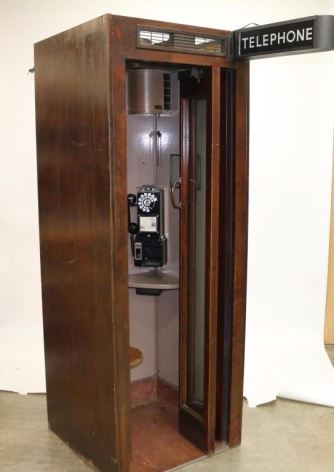 I am not used to all the conversations I hear around me everywhere I go. People talk on their cell phones as they walk, while eating in a restaurant, sitting on the train, and especially waiting in the doctor’s office with its prominent “PLEASE SILENCE YOUR CELL PHONE” sign. The only time I am spared overhearing people is when they are  driving in a car along side mine. Of course then I have other concerns.

For most of my life talking on the phone was seen as a private experience. Special indoor phone booths with doors that pulled shut were scattered everywhere. I remember a bank of them at the airport. My college dorm had one such on each floor. Clearly we didn’t need our friends listening in on our chats. Outdoor phone booths provided similar privacy.

The house phone had a hand set that curved toward the mouth and was able to pick up whispered words if anyone was lurking about.(Such as a younger sibling.) Apparently today’s cell phones lack this ability. Some people shout into them. Others put the conversation on speaker phone. Now I have the privilege of hearing BOTH sides of the discussion.

I can’t fathom what has changed in the general population. But clearly all the things that we thought were private are now freely aired in public. I have learned about fights, medical conditions, misbehaving children, adultery and shoplifting. I still haven’t figured out the proper behavior when standing near such talk. Am I supposed to pretend I haven’t heard? Am I supposed to comment since the person has shared the details with me as well as the person on the other end of the phone?