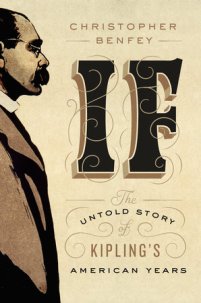 When I was in seventh grade, one of the poems I memorized was If  by Rudyard Kipling. Among the lines I still remember are :”If you can keep your head when all about you/Are losing theirs and blaming it on you,” and “And–which is more–you’ll be a Man , my son.” At the time it seemed perfectly natural that I, a girl, was memorizing a poem promising to make me into a Man.

Recently I finished the biography pictured above which narrates Kipling’s ten year residency in Vermont, in a town just under an hour north of us. It turns out that much of his most popular writing, including The Jungle Book and Just-So-Stories was penned there. I remember from my childhood a line from the Just-So-Stories: “the great grey-green greasy Limpopo River.” The stories of how animals came to be intrigued me.

In the intervening years I somehow absorbed the common notion that Kipling was a nasty imperialist who wrote shoddy books and was no longer of any literary interest. It turns out that I was not alone, and when Benfey, who wrote the book, told peers what he was exploring they warned him that a focus on Kipling would doom his academic career. My thoughts on that kind of dismissal of a writer will follow in another post. Needless to say, somehow I had absorbed the disdain without questioning its veracity.

Kipling, as are most of us, was infinitely more complex and intriguing than I could imagine. Even If seems not a call to manhood but rather a preview of the daunting requirements set out by society for men. The question for anyone is If it is possible to surmount all the challenges. And the use of Kipling to justify wars by the United States chilled me. The final chapter about the generals misusing his quotes in Viet Nam is worth the whole book.

In the end, Kipling has a sober last word:

If any question why we died,

Tell them, because our fathers lied.

So much for the irrelevant imperialist!