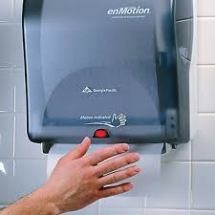 The other day I was at our local library and went to wash my hands in the restroom. No water came out of the faucet no matter how I tried to move my hands in front of what I thought was the sensor. (Even this ability was fairly new to me. My granddaughter has had to teach me how to make various fixtures in restrooms operate.) When I still failed to get any water I went to tell the librarian. She calmly replied, “Oh yes. It needs a new battery.”

I stopped to wonder what persuasive sales people had taken over the fairly standard fixtures in public restrooms. Clearly different pitches appealed to different buyers, so there is no standard. Some faucets go on as soon as something is set on the rim of the sink. I learned this when I rested my purse there! Others need one to wave one’s hands in some sort of pattern. When the water comes out, there is no way to change its temperature or the length of time it flows. Somewhere somebody has made those decisions for the fixture, ignoring the various demands of users.

The biggest con has been the substitution of high speed air machines for paper towels. Knowing that users don’t like them, there are frequently signs touting their “environmental advantages.” They leave off the fact that they distribute germs from the room onto your hands as they circulate the air. And they are useless for washing off a toddler’s face or dabbing a new stain on clothing.

What towel machines still exist seem to have fallen victim to the “automatic” versions. They each have an idiosyncratic way of operating from waving to holding to staring dumbfoundedly until a grandchild takes over. Fortunately they also sport signs saying “if no towel comes out, roll the gear on the side.” I guess even their inventors don’t trust the reliability of the technology.

I never thought I would wax nostalgic for the faucets and towel dispensers of my youth. But it appears that I am.