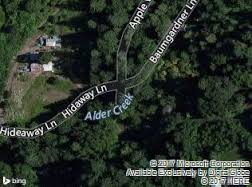 So we needed a home on land and we had very little money. We asked a real estate agent to find us a place in Scappoose(we had gotten fond of the rural life) that was under $20,000. Even though this was 1975, that was still very little money to use to buy a house, but it was all we could afford. We didn’t want to live in a trailer, just a house.

Sadly, not completely to my surprise, the house we bought is no longer standing. The best I can do is to give you a picture of the forest that surrounded us and the road and creek we lived next to. The house was on Apple Valley Road and along Alder Creek. Mr. Baumgardner owned the farm at the top of the road named for him.

The house had been assembled from pieces of other old houses that the owner’s grandfather had cobbled together. They had built a new house for their family on the property next door, and were selling the old house with five acres for $19,000. The couple was our age and had a child the age of our now ambulatory daughter. We were somehow actually able to obtain a mortgage for the property and moved in. My father promptly sold the houseboat to a childless couple.

We moved ourselves that spring of 1976 into our new home and began to learn many of the reasons it had sold for $19,000. But we were young, new parents, and now had a home of our own. The  creek  was too far away from the house for our daughter to stumble in easily. The woods were “lovely dark and deep,”(Robert Frost) and we were blessed to have them all around us. Most of the area for miles was owned by a timber company and was uninhabited. The nights were dark, the stars were bright, and we were content. 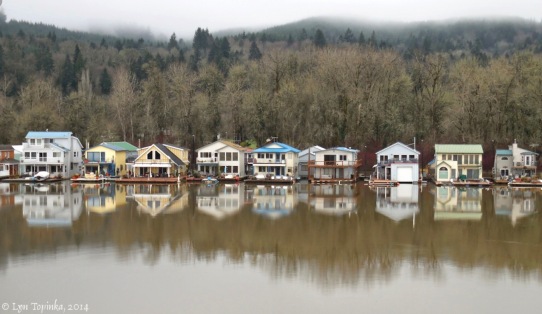 I had always wanted to live on a houseboat, and my father’s good friend had a son who had always wanted to build a houseboat. My father contracted with him to build one which he would rent out to me. The challenge was to find a moorage that had a slip available. At that time(1972) Portland had put a moratorium on new moorages and the only way to get in one was to buy a used houseboat.

I looked all around and finally found a moorage with space available on the Multnomah Channel, an arm of the Columbia River which goes around Sauvie Island north of Portland. Brown’s Landing, as it was called after its proprietor, had an active canoe business and about 20 houseboats stretched out in a line at the base of the dike protecting the farm land from flooding. The town was Scappoose, Oregon, and was about a 30 minute drive from Portland.

While it appears from my WEB searching that our little house no longer exists, this is an accurate view of the moorage taken from across the channel in 2014. It was as bucolic as it looks, with calm water and a backdrop of cottonwood trees. Water and sewer were supplied in pipes that ran along the walkway. The parking lot was up the hill at one end of the walkway.

How was it to live on the water? I will be telling you in the posts to come.