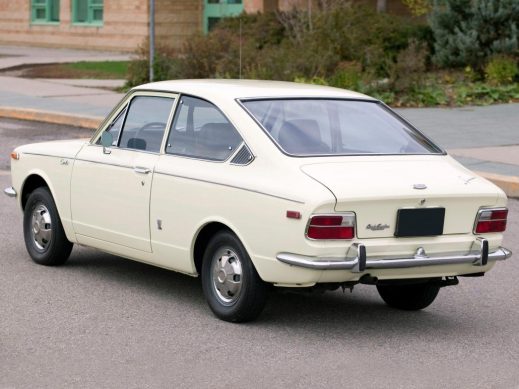 My beloved Ford Fairlane, having traveled back and forth across the entire United States, met an untimely death. I had lent it to a “friend” who drove it headlong into another car on a quiet city street, demolishing my car. My “friend” was so “under the influence”(of what I dare not guess) that he just sat there until the police came to wake him up. So I lost a car and a “friend” in one afternoon.

Some time later, I bought a 1970 Toyota Corolla, similar to the one above, to replace my Ford. I know. I said I would always stick with Fords. But this was 1970, and anyone who was anyone on the West Coast now drove Japanese cars. And I wanted to be anyone, so I bought one. Somewhat clueless buyer that I was, it wasn’t until the car was driven to my house that I discovered it had manual transmission. And I had never driven a stick shift in my life. But—how hard could it be?

Well neigh impossible, it turns out. But my little sister came to the rescue. She drove the car over to a big empty parking lot. “We aren’t leaving here until you know how to shift gears!” So I ground the gears and stalled the car and ground some more and backed up by mistake. Finally I thought I was the queen of shifting. Then she said, “The real problem is on hills.” So she took me to a very slight incline and told me to imagine that she was lying behind the car. Then she told me to drive up the incline. I guess the fear of running her over(even just in my imagination) really worked. I learned exactly how to coordinate the clutch, brake and accelerator to go up a hill without rolling backwards.

And until 1996, when I developed severe bursitis in my clutching knee, I drove Japanese cars with stick shifts. And boy did I think I had it going on! But as we know, pride goeth before a fall.

My next car was a minivan.