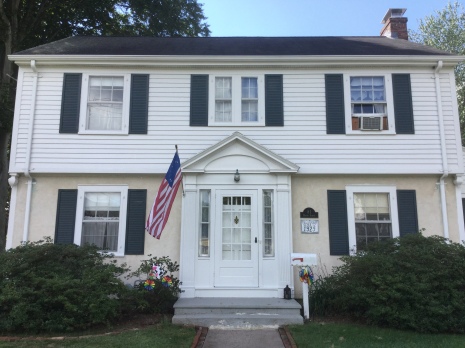 In late middle age, you can continue on in your usual rooted patterns–tenured faculty position, solid civil service job, kids launched, and routine established. Or, you can lay it all down and move 3000 miles away to restart your life. We felt very strongly that this was God’s intention for our lives. That will seem odd to many, but it felt true for us. Our daughter lived in New York City, so that was a logical reason to relocate, for those who needed logic.

We left Portland, in February 2001, just as scores of new people began flooding into Oregon, the new hip place to be. We went to Connecticut, just as people were leaving Connecticut for the lure of Oregon. Nearly everyone we met had an adult child who had left for Portland or Seattle.

My husband had a job offer in Hartford, and I could teach in the local community college. We worked with a real estate buyer’s agent long distance to find a house. We wanted to live in a racially diverse neighborhood, with sidewalks, walking distance to a grocery store. We flew out one weekend in the fall and bought the lovely colonial revival house pictured above. It was bigger than our old home, had a larger yard, and cost less than the one we had sold. A great start. It also looked exactly like my childhood doll house!

But we were moving in February and we had two Australian Shepherds. Airlines won’t fly dogs in the dead of winter, so we needed to drive ourselves across the country. It was a very good thing that we had purchased that minivan the previous spring. So on February 14, Oregon’s birthday, we loaded ourselves and our dogs into the Dodge and left for the East.