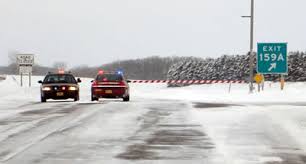 Most people don’t try to drive across the country in February, but that was when we had to travel and take the dogs. Between Oregon and Connecticut in the winter, snow is inevitable. In fact, our moving company decided to go south through Texas to avoid weather delays.

We tried to go about 550 miles a day. As providence, or luck,or fate(pick your philosophical choice) would have it, there was a series of storms just ahead of us and just behind us. As long as we kept up our pace, we could completely avoid the snow storms. We would come on the Interstate hours after the gates(such as pictured above)had been reopened to traffic. The next day, they would be dropped again closing the highway. The most snow we ever encountered was in Wyoming as powder blew across the road from nearby fields.

There was abundant snow everywhere we traveled, but it wasn’t snowing on the days we were actually driving. The dogs loved the snow and ran, jumped and spun in it each chance they got. It was, however, freezing. Literally. We had a zippered car top carrier to hold our suitcases, and my husband emptied it each evening to bring things into the hotel. One frigid Wyoming morning, as the dogs merrily chased rabbits across the adjacent snowy fields, my husband nearly gave up trying to repack the carrier. Finally, the zipper closed and we set out again.

The movers got stuck in the snow on their southern route and were delayed for three days.

10 thoughts on “Traveling East in Winter”