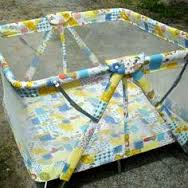 When my daughter was three months old, I had a chance to take a course towards my master’s degree. My husband was in school himself, so he wasn’t available to watch her. Fortunately, from my work in Head Start, I had made friends with a county worker, Donna, whose little baby was almost exactly the same age. So we made a trade to swap mornings watching each other’s babies.

I had the easier time of it, since I could drive up to Donna’s house with all the paraphernalia that infants require. She had to haul the play pen, bottles, diapers, toys and baby down the walkway to our houseboat. Amusingly, after the four hours that each of us was away, we were bursting with the milk that our hungry babies had been denied for that time. When I got back to her house. I would just plop down with my baby and a cup of coffee and catch up with Donna. When she returned to my house, she did the same.

One of the things that writing this series of posts about “cookie people” has done for me has been to remember the kind and helpful neighbors and friends that were in my life, often for just a short time. Each of them made a significant difference for me. Donna allowed me to take a class knowing my daughter was being well cared for. Watching her son allowed her to work very part-time as a social worker. I lost touch with her after I moved into the city. She was very important for a very specific time in my life, as are many of the people who help us carry on. I wonder if I have ever been a “cookie person” for someone. Have you?