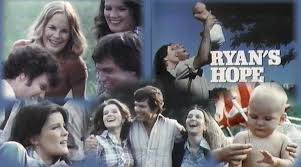 Once we moved onto our five acres, I became friends with the woman next door, Mary Ann Mock. She had a baby Ricky the same age as my daughter and a son, Scott, two years older. The Mocks had sold us our home, formerly owned by his grandfather, and built a new one on the adjacent land.

The highlight of our weekdays was the soap opera “Ryan’s Hope.” It aired at lunch time, for just half an hour, so it was conveniently on while the kids were awake and just before we would put them down for their naps. After a morning of infants and toddlers, we were both ready to lose ourselves in the drama of Mary and Jack. We both were well past the honeymoon stage(as are most women with infants!) and their romance was a great distraction.

My daughter received her first injury while we were visiting. Once she had fit under the dining room table, but she had grown a few inches. She ran headlong into the edge of table and bumped her head. I think she was as angry as she was hurt, but I was in a panic. Mary Ann calmly got a wet washcloth and some ice and showed me how to hold it against my daughter’s forehead to reduce the swelling. I learned from Mary Ann that my calm would calm my daughter, something I would use for all the subsequent bumps, bruises and fractures to come.

Here’s to friends and soap operas. They both eased the stress of those early years of parenting.