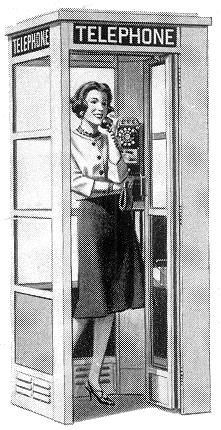 When I was in high school in the early 1960’s, every girl I knew was advised to have a dime in her shoe. This was to be used to call home in the event of some occasion–never directly named, but assumed to be related to boys’ behavior. The dime was to put in a pay phone of the kind pictured above.

Pay phones were everywhere. The one above was typical and had a couple of features alien to today’s high school girl. The dial is a rotary, not push button, and was pulled clockwise to each number in the sequence, then released to allow  each subsequent number to be dialed. The three slots on the top of the box were for nickels, dimes and quarters. A call cost one dime. However, it was also possible to place long distance calls by dialing 0 for operator. You would say what number was needed, and the operator would tell you to put the required change for three minutes into the phone. As the three minutes neared its end, the operator would warn you to either hang up or add more money. With no added money, the call would be disconnected.

The bottom of the phone had a little coin return opening. If the number was not answered, the money would be returned. My little brother always entered every phone booth we passed to check for unclaimed coins in the coin return. Once every twenty booths or so, he would find a dime. The unpredictability of this find delighted him and kept him checking.

Originally phone booths were opaque, not transparent as pictured above. This allowed Clark Kent to change into Superman without revealing the switch!

(I added a picture of the opaque one to illustrate this.)