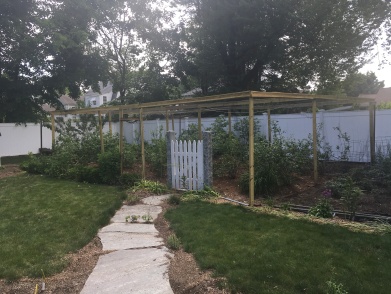 I have been married thirty years this month to a man who is happiest when he is outdoors. Winters in New England are long; the ground freezes; there is only so much snow blowing and snow shoveling to be done. So he is able to plan projects for the spring.

He has an impressive garden of at least 18 blueberry bushes, and he has been in an ongoing battle over ownership of the fruit with the birds who frequent our yard. For the past several years he used a pipe and net system with the netting held together with lines of wooden clothespins. Each evening he would go out to see which birds had managed to find gaps in the netting and get to the bushes. He would then cajole them back out. Occasionally he would need my help to free the talons of a jay from the netting.

All winter he planned the structure pictured above which he finished just as the berries ripened. The scale is so enormous I wouldn’t be surprised by a city inspector asking to see a building permit! This one has a elaborate combination of wood beams and poles, pipes and yards and yards of netting. So far birds have not made their way into the berries.

Now I am afraid that he will discover that his main competitors for the fruit are our grandchildren. They not only feast away, they also bring their friends over to eat “Grandpa’s berries.” Let’s hope they don’t leave a hole in the netting!