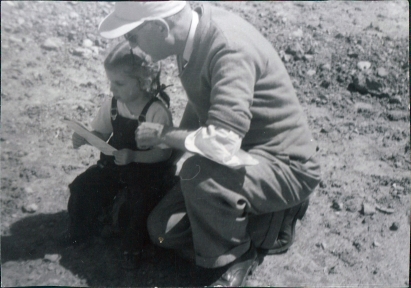 Here my grandfather has crouched down to share some reading with me. I often cite my grandfather when I write about virtues because he was one consistently trustworthy man in my childhood. He lived 3000 miles away, but he stayed in touch with letters, post cards from his travels abroad, and twice yearly long distance telephone calls. Three different summers we traveled East and I spent extended time with him and my grandmother. I could rely on his constancy and trustworthiness. He never promised what he could not follow through on. He didn’t make false promises just to cheer me up.

In Connecticut, a politician who promised the elimination of the state income tax was defeated. I think a majority of residents saw that this was a false promise, unlikely to be achieved without significant upheaval in services. Everyone would like to have no taxes, but they are our collective way of paying for shared services. By now we have become jaded by politicians promising things–peace with North Korea, peace in the Middle East, a return to 1950’s America–that are unlikely to be fulfilled. In fact we have come to distrust politicians for just such false promises.

I’m not sure that trust has to earned, as many believe, but I do believe it can be lost. I like to think that I begin with giving someone the benefit of the doubt and that my trust has to be broken. Sadly broken trust can take a long time to repair. At heart I think trustworthiness means following through on promises, not agreeing to something just to placate someone(with no intention of doing it!) and meaning what one says. I worshiped among Quakers for many years. They didn’t believe in swearing oaths. Rather they believed that they should “let your yea be yea and your nay be nay.” That seems a right path to follow.

4 thoughts on ““Worthy of Trust or False Promises?””