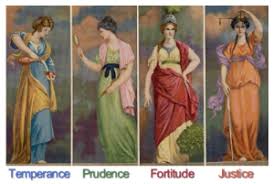 I first heard the word temperance in high school when studying the liquor smashing behavior of such people as Carrie Nation. At that time in the late 19th century many people opposed alcohol in all its forms, stating that it caused many social ills. The Temperance Movement, as it was called, predated but was eventually subsumed by the Constitutional Amendment enacting Prohibition. Since the Temperance Movement opposed all alcohol, as did Prohibition, I mistakenly believed that temperance and abstinence from all drink were the same.

However, the virtue of temperance has a more nuanced meaning than total avoidance. It includes moderation in all forms, whether in food, drink, language or actions. In that sense it is close kin to prudence, which I discussed a few days ago. But for me prudence suggests a pause before action while temperance seems to be a quality to maintain during action. It would mean that I know when enough is enough, whether it is dessert or a seemingly pointless argument.

Today in the U.S. is called Black Friday because the stores are full of “unbelievable” bargains. The day certainly calls out the opposite of temperance–greed. The ads suggest that we MUST have MORE. And we need to hurry and buy before it is TOO LATE. Because we are having Thanksgiving dinner tonight to accommodate my grandchildren, I missed the sales. But ever since reading the book “Radical Gratitude,” I have found myself approaching all purchases with both prudence(before acting) and temperance(knowing I have enough.) Both are counter cultural, not easy, which I suppose is why we hear so little about these two virtues today.

16 thoughts on ““Temperance or Prohibition?””