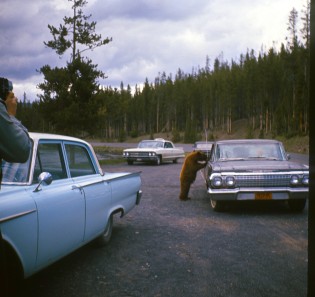 In June 1963, my mother drove the four of us, now 16, 13, 10 and 8 across the United States from Portland to Buffalo, New York. She was the only one old enough to drive(I didn’t get my license for two more years) and did all the driving herself. We drove in a Ford station wagon with a luggage rack on the top. The car had a bench front seat, a bench middle seat and a flat “way-back” covered with pillows and sleeping bags. Each seat had its advantages and disadvantages. It won’t surprise any of my readers to know that we almost always wanted to be in the part of the car that we weren’t currently in.

The picture above was taken from the “way back” of the car when we were driving through Yellowstone National Park. My mother tried to hit interesting spots on the way, though her idea of interesting and ours rarely coincided. We did all enjoy Yellowstone, however. “Craters of the Moon,” a must stop for her was tolerated only if she agreed to stop at the endlessly advertised Wall Drug Store.

The drive covered over 2600 miles and took us six days to cross the country. To say that we were bored and often cranky is putting a kind face on things. But we did end up playing several car games as we went. One favorite was the license plate hunt. Each of us tried to be the first to spot a license plate from another state. Wall Drug Store parking lot actually was a gold mine of various plates. With the exception of Hawaii and Alaska, by the time our trip was over, we had seen plates from every state, keeping track on a piece of paper.

The other game was the Alphabet Hunt. Here we each looked for the letters of the alphabet in order from a to z. Each of us kept our own tally and could not count a letter found by a sibling. Billboards were abundant in those days, but it still took many hours to find the complete set. It was frustrating to spot a “q” when I was only up to “e” in the search. But we actually kept to our rules and out of trouble for a while.

My mother played her own game. She would announce a mileage on the odometer and state that no one was to speak until that mileage was reached. Never have numbers turned over more slowly than those times. I am sure she wondered countless times why we hadn’t just gone by train as in previous visits East!