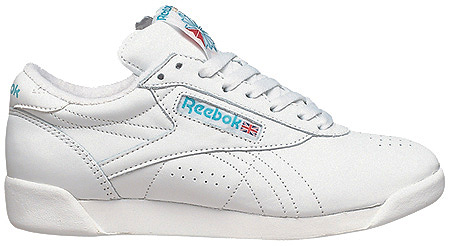 In 1980 I joined the thousands of women in their thirties who decided to fight aging by jogging. There were no spandex running outfits, no special sports bras, no countless choices for shoes. While Nike had been invented by Phil Knight in Oregon, supposedly by using a waffle iron to figure out the sole of his new shoe, I bought a pair of Reeboks, as seen above.

Jogging was pretty self explanatory, so I didn’t need a trainer, a video or a gym. I just needed to put on my Reeboks and shorts(just cotton, not nylon) and leave the house. I simply ran slowly around the neighborhood. While the practice seemed pretty silly to me, I did it faithfully for some time.

After a while friend asked me to join her in a 5K run. I agreed without really thinking it through. That Saturday I joined hundreds of other women in a run around Portland. I was nearly the last woman to finish and met my friend who had arrived long before and had begun to worry about me. It proved to me that I was not a candidate for running events. That was my first and last.

Eventually jogging and my knees had a disagreement and I had to find another way to get some exercise. That’s when I took up swimming, a sport I had always enjoyed, which took me to the YWCA, home of the fat jiggling machine.