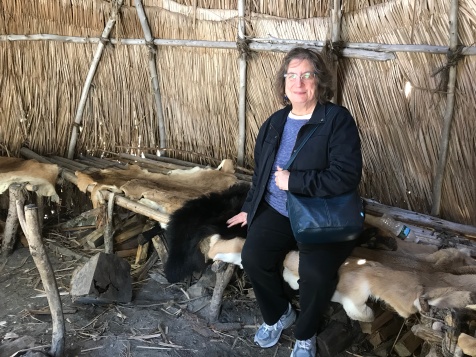 A highlight of our visit to Plymouth, Massachusetts was a half day spent at a living history museum Plimouth Plantation. It features a Wampanoag village and an English village, both replicating how each would have looked in 1627. The interpreters in the Native American village belong to various nations, and they respond to questions in the present. The interpreters in the English village are Americans, and they respond to questions as if it were 1627.

Today’s photo was taken inside a reproduction of a Wampanoag summer house near the Eel River. The summer houses were made of a tree branch framework covered with overlapping mats made of cattails. The sleeping, sitting, eating, working platforms on the sides were covered with animal furs. I am resting on a black bear hide. The Native Americans lived near the river in the summer, gardening and fishing to store food for the long hard New England winters. In winter they moved inland into the forest where they had more protection from the elements. Their winter homes sheltered from one to four families and were made of bark over a branch frame.

Just before the arrival of the band of English Pilgrims the Native people had been decimated with a plague, the specifics of which are still unclear. The same disease swept down the New England coast from what is now Maine and is assumed to have been introduced by European sailors. The area where the Pilgrims landed was therefore uninhabited.

Tomorrow I will show you the English village.