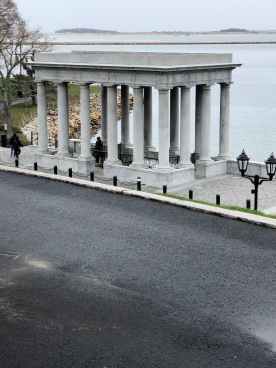 Plymouth Rock supposedly marks the spot where the first Pilgrim set foot on land in 1620. Apparently this is not mentioned anywhere in the official records of the Colony, but that hasn’t stopped every American child of my era being taught about it. Of course I needed to see it and, hopefully, set foot on it myself. This massive structure, built over the rock, announces its importance.

What? The Pilgrims not only stood on this rock but they also carved 1620 into it? And how did their footprints last so long anyway? The original alleged Rock was chipped away, painted and basically destroyed. This rock, supposed to be what was left of it, was marked with the date 1620 in the late 1800’s. I have no idea who thought this was a good idea. The National Park rangers get tired of answering the same question over and over: “How did the Pilgrims make such neat numbers?”

Oh well. Maybe I can find the remnant of the cherry tree George Washington cut down!