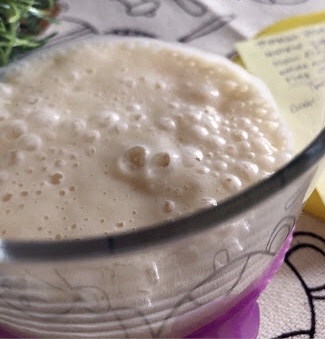 My husband love sourdough bread, so I was intrigued by a long article in the food section of yesterday’s New York Times. A lovely photo of two loaves of sourdough was followed by step by step instructions to make it. The instructions went on over three pages. At this point I realized I could have walked to our Whole Foods Market (not a short walk), bought his favorite bread, brought it home and he could have consumed it during the time it would have taken to make their “simple” loaf. So there will be no sourdough baked here any time soon.

I was reminded, however, of Herman, a gift that circulated endlessly among my friends in the 1970’s. Herman was a starter contained in a glass jar with instructions on his feeding and use. Containing just milk, flour, sugar and water, Herman grew with each feeding, producing the concoction pictured above. I used it to make coffee cake and was then supposed to pass on the extra to a friend.

What did zucchini and Herman have in common in rural Oregon in the 1970’s? Everyone I knew had too many of each. Of course it was horrifying to throw out either, so I am sure that we found ways to bake zucchini bread with the starter Herman. And we kept asking each other if anyone needed Herman or zucchini. No one ever did.

Herman must have eventually died. I don’t remember any ceremony for him. But I do remember the initial joy of receiving him as a gift followed by the nagging sense that I needed to both feed him on schedule and find a friend to gift with the excess.

Does anyone else remember those days?