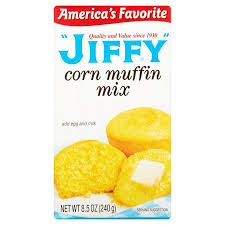 Sometimes I used to bake things that I had never eaten growing up. Corn muffins and corn bread were new to me when I first married. I was introduced to Jiffy Corn Muffin Mix and used it regularly. It was simple, tasty and very very quick. I never stopped to think about what the mix contained, assuming that it was pretty basic ingredients like corn meal and flour.

When she was twelve, one of my daughters became a vegetarian after realizing that she couldn’t eat “anything with a face” as she put it. She informed me that Jiffy Corn Mix contained lard, that lard was animal fat, and that she wouldn’t eat it any more. Glancing at the familiar package, I realized that it not only contained lard but also a bunch of unpronounceable ingredients. By then I had decided to no longer eat ingredients I couldn’t identify, so the mix was out for the rest of us too.

Fortunately at about the same time an entrepreneur called Bob started a local milling operation as a response to the consumer demand for more whole grain products. We drove over to his place and was given tour by Bob himself, a genial man with a passion for whole grains. We bought a bag of ground whole grain cornmeal and I found a simple recipe for corn bread. We liked the crunch that the whole grain gave, the batter was free of lard, and I could identify all the ingredients. It took 5 minutes longer to make, but it was worth it.

In the years since then, Bob grew his business exponentially. Now sold across the United States as “Bob’s Red Mill” it offers every kind of grain and flour imaginable. I count myself lucky to have met Bob when he was just starting out, able to tour the mill with us, and introduce me to a newly favorite ingredient–whole grain ground cornmeal.