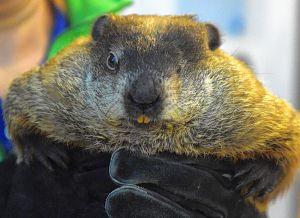 In the United States today is celebrated as Groundhog Day. The story goes that if the groundhog sees his shadow on February 2 there will be six more weeks of winter. If the groundhog fails to see his shadow on February 2 there will be an early spring. I have a couple of problems with this method of prognostication. First, it is counter intuitive, so no one can remember which forecasts which. I think this is because it would seem logical that seeing his shadow would mean the sun was shining, predicting an early spring. Clouds would indicate that winter will drag on. But in the custom it is the reverse. Secondly, no matter what the groundhog sees, winter in New England will go on for at least six more weeks. Spring doesn’t arrive here until  April–eight weeks out.

For some reason “groundhog” seems to engender warm fuzzy feelings from the weather casters. But even a quick glance at any pictures of “Chuckles,” our local groundhog, shows the handler wearing thick gloves. And those teeth look none too friendly.

I decided to rename February 2, “Woodchuck Day.” That would elicit the appropriate groans all around. No one who lives in New England feels warm and fuzzy towards woodchucks. They devour everything in sight, dig holes under out buildings and waddle in front of cars. Those groans would be especially apt at the start of February here. The month marks the beginning of another long stretch of cold days. Don’t let the rodent fool you. Spring is still a long way away.