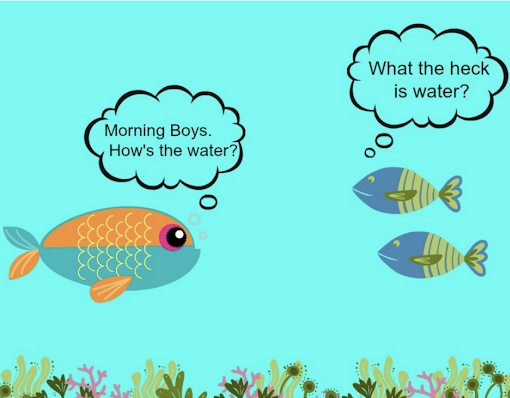 After writing the series on the contrast between life before and life during the pandemic, I began to think about other times when either I or the society around me has had to adjust to new realities. As the picture above illustrates, it is difficult to discern the world around until it suddenly shifts. Surrounded by water, the fish has no concept of water. It is all she knows. It just IS.

Many times people recover from a near death experience and report that the world looks completely different to them. They have new understandings of things they previously took for granted, they say. My recent posts have highlighted how many aspects of my life I had taken for granted, from shopping for pants, to meeting a friend for lunch. Clearly the pandemic has brought that “taken for granted life” into clear view.

In upcoming posts, I will share some times when my world seemed to wobble on its axis before it righted itself enough to establish a “new normal.” Stay tuned.