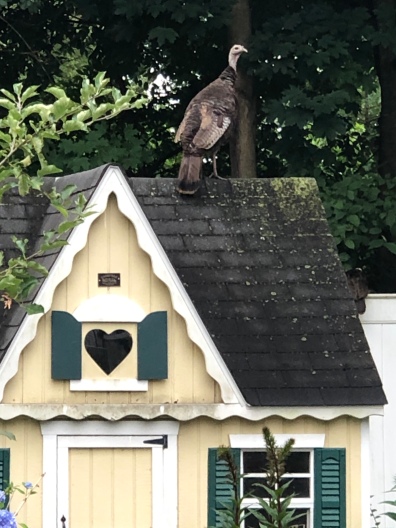 A friend reminded my this morning that before the eagle was chosen to be the national bird of the United States, the turkey was under consideration. This morning I was finally able to take a picture of the mother turkey who has been frequenting our yard recently. Hard to make out, the little beaver looking blob on the fence to the right of the photo is one of her offspring facing backwards. This is the first time we have spotted the mother on top of the playhouse, but it does give her a wider view than from the top of the fence. Perhaps she is looking for the other four young turkeys.

At the moment I think that the turkey would be a much more fitting national bird than the eagle. Certainly vast portions of our country have managed to allow the covid virus to run rampant while their citizens fight over mask wearing. There is nothing soaring and majestic as an eagle in most of the nation right now. Connecticut is known as the “land of steady habits,” so I guess once we donned our masks in April amid the devastating effects of the disease here, we never stopped wearing them. We never had a chance to think they were political, so scared were we of getting sick.

So we are home still. And I expect we will remain so as it is impossible to isolate Connecticut from the rest of the country. New Zealand is an island nation and can restrict its borders and did so to contain the virus. We aren’t and we can’t. But at least we have a supply of masks in the meantime, no matter how long “meantime” ends up being.