Back before social media, helicopter parents, stranger danger, and being chauffeured everywhere, I was a Camp Fire Girl tasked with the job of selling Camp Fire mints. That meant I was expected to take my carrier of six boxes of mints door to door in my neighborhood and sell them to kind people. I was to wear my uniform, have a good attitude, and sell, sell, sell.

I was shy and little. But I had a deep sense of responsibility to my group, so I would set out each year with my boxes of mints. Each year I dreamed that somehow I would sell enough mints to earn a scholarship to camp. Each year at Camp Namanu they would introduce the girls who had sold that many mints. I think you had to sell about five thousand boxes to get a scholarship.

In my neighborhood, houses were sparse and spread out. I trudged along walking up long driveways, knocking on doors, gathering my courage and smiling. I usually sold about 10 boxes for several afternoons worth of trying. I hated every minute of it.

Needless to say, I buy anything that any kid knocks on the door to sell me. Cookies, candy, wrapping paper, cookie dough, and magazine subscriptions. Usually, though, I see a parent hovering in the background. Some things have definitely changed!

I started babysitting at the ridiculous age of 11. Either I was incredibly competent (I would like to think so!) or the neighbors were terribly desperate(more likely.) At any rate I babysat through elementary school, high school and college. Today, however, just my first encounter with babysitting someone else’s kids(i.e. not my siblings. By the way, I didn’t get paid to watch my siblings.)

The doctor and his wife down the road had five boys under the age of eight. I probably did seem very mature to the mom since I was a girl, fairly competent, and used to little kids. I earned 35 cents an hour watching these kids, the standard rate in 1959.

The littlest ones were no problem. I was used to diapering my little sisters. Fixing snacks was also simple. Watching the boys race around the back yard was a no-brainer. However, the second oldest kid, probably six years old, climbed a tree and challenged me to get him down. Apparently this behavior got a rise out of his mother, and he thought it would alarm me.

I remember very calmly telling him I wasn’t going to call the fire department. He could stay up there as long as he wanted. It gave me one less little boy to tend to. I went into the house to prepare snacks, and he climbed back down. Safely. 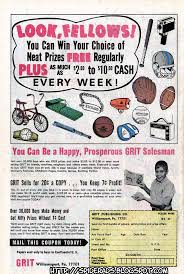 My brother and I were always looking for ways to make money. We each had a stamp collection, and stamps cost money. We had a small weekly allowance, but deductions were regularly made for bad behavior. This usually entailed fighting with each other or with one of our sisters. Needless to say, with four children, bad behavior was routine, and our allowances sometimes even sank into the debit column. No, we didn’t have pay money, but we would go a week without an allowance at all.

In those days, stamp companies would send you packs of stamps “on approval.” If you wanted some of them, you mailed back your coins to pay for them. Otherwise, you sent them back. The company I remember was Harris Stamp Company, and the stamps were in little paper envelopes and sold for around 25 cents a packet. We earned one penny for every dandelion we dug up, but that took quite a while to accumulate 25 cents.

So we were both intrigued by the ad for “Grit” that came with every stamp mailing. We really liked the idea of earning money and prizes. The problem was we had no idea what “Grit” was. We couldn’t really tell from the ad, and our mom didn’t want to be bothered by any more of our money making schemes. So instead of sending for the information, we spent time planning how we would spend our earnings.

I actually never knew what “Grit” was until I looked it up while writing this post. It turns out “Grit is a magazine, formerly a weekly newspaper, popular in the rural US during much of the 20th century. It carried the subtitle “America’s Greatest Family Newspaper”. In the early 1930s, it targeted small town and rural families with 14 pages plus a fiction supplement.” Needless to say, in our prosperous suburban neighborhood it would have been a very very tough sell!

When we moved into the new house when I was 8, a large mahogany upright piano came with it and I played throughout my childhood. Always in search of ways to make money, I asked my father whether there were any pieces he would pay me to learn. I was reminded of this recently when a child I know asked me if I would pay him a dollar if he stood on his hands.

My father, more obliging than I was to that child, said yes. He would pay me 25 cents to learn The Battle Hymn of the Republic and 50 cents to learn La Marseillaise. His mother and grandparents were French, so perhaps he remembered that tune from his childhood. I loved playing The Battle Hymn and memorized it easily. I struggled with the French tune, and I was never able to do anything more than play it with the music in front of me.

Curious to see what 25 cents in 1958 would be equal to today, I found a nifty calculator on line which told me that it would equal $2.13 today. So the handstand was reasonably priced, since it was at least as hard to learn as the song on the piano.

I can still impress people by sitting down at any piano and pounding out The Battle Hymn of the Republic. And I will accept the next money making idea that a child presents to me. Turnabout’s fair play, after all.

For a series of posts, I have settled on all the ways I have made money from the time I was 11. The more I think about how varied has been my work history, the more stories about it come to mind. The more I think about it, the more I realize how much of my life was spent trying to think up ways to earn money. I never had easy access to it, so I had to find enterprising ways to acquire it.

Which brings us to strawberry picking. When I was a kid in Oregon in the 1950’s, kids were encouraged to help pick crops for pay. Everyone I knew at Camp Namanu had tried their hand at it, and some told me they had even paid for camp with their earnings. This sounded promising. I liked strawberries, didn’t I?

To get to the fields, kids met a bus at 5 in the morning. That should have been enough of a disincentive to begin with. But then there was the actual work. Strawberry picking is done on the ground along ENDLESS rows that you are assigned. You fill flat containers to the top with berries, take the container to a central station to be weighed, get another container and return to your row to start again. It is hot and dirty work. In the case of the field I worked, the rows had already been picked over, so the berries weren’t abundant. And in this field, you had to remove the stem end before putting it in the container, ensuring that yours fingers were stained red.

I worked hard for hours and earned almost no money. I was hot, tired, thirsty and cranky. I didn’t go back. And I didn’t jump at the offer later that summer to pick beans. Even with the promise that “you get to do it standing up!” 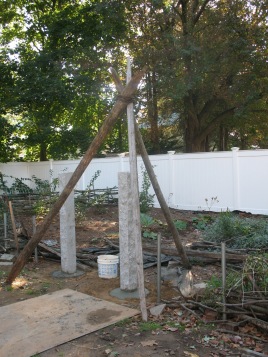 Bob was a terrific problem solver. He actually seemed to love the challenges of problems that Charlie and I encountered in and around our home. One of his favorites involved the project shown here in our garden.

Charlie, who loves all things stone, decided to build a gate for his blueberry garden. He purchased two large granite posts and had them delivered into the back yard. Granite is, of course, very heavy. In order to get the posts upright and steady, they needed to be set into the ground in a deep hole and cemented in. But how to lift them up, drop them into their holes and keep them steady while the cement dried?

Bob thought about the situation for a while. In fact, Bob often literally slept on things. He would come over in the morning and let us know he had figured out the answer to a troubling question. In this case, he and Charlie rigged up the pole, pulley and rope contraption in the photo. They were able to lift each pillar, position it correctly and center it in the hole.

At the end, Charlie insisted that Bob write his initials in the wet concrete. We have the mark of a great problem solver proudly displayed in our garden today. Thanks again, Bob.

Still mourning Dale and Alice, we moved across the country to our new home. Very soon we met Bob, affectionately referred to as “Sticks” because of his very long, very skinny legs. Bob was French Canadian, a staunch Catholic and the 13th of 13 children. His family had moved to Rhode Island when farming failed in Quebec, and eventually some moved to Hartford. Bob was a jack of all trades, working at one point in the typewriter factory and at another as a projectionist for the University of Connecticut. He provided very well for his wife and two children.

By the time we met him, Bob was retired, but certainly in no way inactive. In our town, if you no longer want something useful, you leave it at the curb for others to take. We live on a busy street, so things disappear quickly. Still, one morning when Charlie set out a broken lawnmower, it went in a flash, rapid even for us. Sure enough, it was next door in Bob’s yard, along with his five other lawnmowers. Bob couldn’t stand to see anything abandoned, certain he could get it running again. He couldn’t believe that Charlie had given up on it.

But his greatest gift to us was to take over where Dale had left off. He was determined that before he left this earth, Charlie would be able to build, repair or rebuild anything. And he pretty nearly succeeded. More tomorrow.