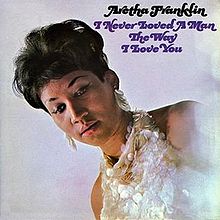 When Aretha Franklin died a few days ago, I reflected back on our life together through her music. The first album I owned by her is shown on the right, the next on the left. I was midway through college and was just beginning to become acquainted with the Detroit sound, including Franklin and Motown. I began buying the music to add to my previously almost all folk collection. The Harvard Coop had a vast record section, and I would drop by there every time I had earned some money from baby sitting, my main income source in college.

Back in Oregon after college, I became friends with a racially diverse crowd in contrast to my nearly all white youth. Eventually I married and was invited by my in-laws to an integrated, but predominantly black, church. There I was embarrassed to realize that gospel started in church, not in the pop world. I really did have it backwards! However, I always figured Aretha would forgive me. She had made the outrageous move out of the church into the pop world. I smiled thinking I had made the outrageous move out of the pop world into church.

I learned that her funeral will be private. I can understand the family and friends wanting to avoid a media circus. Still part of me wished that the service could be televised so that I could join in with the “homecoming” gospel celebration of her life.

One thought on ““Aretha and Me””